It was a great weekend for high school fencing in New Jersey. The top 16 squads in each of the three weapons fenced each other to determine who would be crowned the state’s Squad Champion. Congrats to Northern Highlands Girls for winning foil AND saber and to Bernards for claiming another state epee title. Congrats to Montclair Boys for their epee title (and a shout out to Gabe Canaux for making the Cadet World Team!), to Columbia Boys as saber championships, and to Hunterdon Central Boys as foil champs. A special congrats to Pompton Lakes on their bronze medal in epee, their first state placement in 10 years! Our production team was following this great group of guys on Sunday and below is a photo of our crew and the epee squad with Coach Owens. 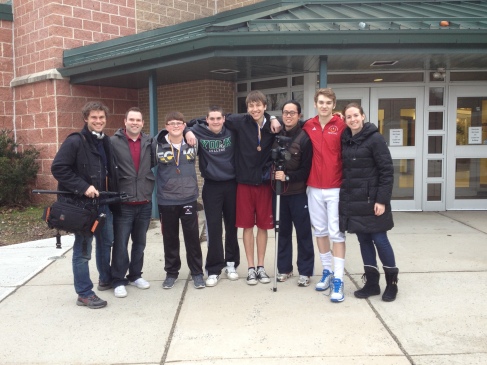 The season isn’t over yet. Wednesday night features the NJSIAA Team matches for bronze and gold at Morris Hills High School. Columbia Boys will face Watchung Hills for the gold and favored Northern Highlands Girls will face Montgomery for the state title. Bronze medal matches will begin the night with Millburn Boys taking on Ridge and Columbia Girls versus Livingston.

It was a very strange but exciting weekend to be at the Junior Olympics as a filmmaker and not a competitor. (I haven’t fenced at a JOs in 7 years, but it still feels like yesterday.) Following many events, days would begin at 7am and sometimes end at 11pm! Thankfully, events had scattered start times so the larger events would begin early and end at a reasonable hour. The largest was the Junior Men’s Epee event with 220 competitors and all of these kids have qualified through their division or had national points prior to the event. The sport is definitely growing and I was proud to see the strong NJ representation and my young teammates competing.

NYAC Junior Men’s Epee team wins in overtime to advance to the semi finals over DCFC.

Today, many of the freshmen and sophomores in New Jersey are competing in their area’s freshmen and sophomore tournaments. I think this is a great way to get the newbies in a competitive environment without having to join the USFA (which can be expensive if you don’t know if you want to stay in the sport just yet). Good luck to all!

Since the Ivy League Championships have been postponed due to the snowy weather, here are some early predictions for the NCAA Championships.

The 2013 NCAA Championships are scheduled to take place in over a month from now in San Antonio Texas, but it’s never too early to make predictions.

This championship will feature an array of 2012 London Olympics, ten reigning or former NCAA champions, and dozens of fencers ranked at the top of the United States points list. Assuming the regional qualifications go according to expectation, this could shape up to be one of the most competitive tournaments in NCAA fencing history.

For those unaware of the format—the tournament is divided into six events: Men’s Epee, Men’s Foil, Men’s Sabre, Women’s Epee, Women’s Foil, and Women’s Sabre. Each event is comprised of 24 competitors who fence each other in five-touch, round robin format over the course of two days. At the conclusion of the round robin fencing, the school that has earned the most victories will be the NCAA team champions.

This has been an especially exhausting week for pre-production on the film. I have submitted to several big film grants all while filming at the District 4 Championships and one match of the Sweet 16 for the girls last night. Whew! But each step is moving the project forward and I can’t be happier about that. Next up, preparing for Junior Olympics.

Here’s a shot from District 4, the top-4 epee fencers (all from Espada!)

Now that all 4 Districts have crowned their champions, it’s time to begin the Sweet 16 round of the NJSIAA Fencing Team tournaments. The girls will begin with matches throughout the state and the boys will fence on Wednesday. Below is the bracket for the girls. Good luck everyone!